Fun Stuff to Do

Fun Stuff to Do in Clarksdale, MS 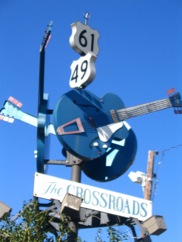 The Crossroads – A legendary tourist stop and great photo-op
Hwy. 61 at 49 in Clarksdale.

Ike Turner’s home
304 Washington St.
Where the Father of Rock ‘n Roll grew up. His “Rocket 88” is credited with being the first rock ‘n roll record.

Moon Lake/Yazoo Pass
Bound by Highways 1 and 49, scenic Moon Lake is an oxbow of the Mississippi River. Tennessee Williams’ wrote about Moon Lake in several of his dramas.

Muddy’s Mound
Stovall Rd between Lee Dr. and Hwy 1
Former site of Muddy Water’s famous cabin (now housed inside the Delta Blues Museum). A marker on the site tells the story and includes this quote from Eric Clapton, “Muddy Waters’ music changed my life, and whether you know it or not, and like it or not, it probably changed yours, too.” A Mississippi Blues Trail Marker at the Mound.

Tennessee Williams Historic District
Sharkey Ave. at First Street, Court and Clark Street
Clarksdale is the childhood home of playwright Tom “Tennessee” Williams. Take a walking tour of the this historic neighborhood that influenced the characters and events in his plays.

Wade Walton Barber Shop
317 Issaquena Avenue
Clarksdale’s famous blues barber who not only cut the hair of Ike Turner, Sonny Boy Williamson II and others, but recorded blues on local and international labels. The original barber chair, stool, counter with sink, Coke machine and storage cabinets are now on display in the Rock & Blues Museum.

W.R.O.X. Museum (a.k.a. Clarksdale History & Cultural Museum)
257 Delta Avenue
662-645-8874
This was the site of the W.R.O.X. blues radio station from around 1946 to 1953, according to the building’s current owner, Bubba O’Keefe. Early Wright, Ike Turner and Robert Nighthawk all had shows here, plus Elvis, Sam Cooke and Sonny Boy Williamson II were all on the air there at some point in time. Open festival weekends or by appointment.

A little further away…

If you're looking for a cool place to stay in Clarksdale, Blues Hound Flat is where it's at.